Talk To Us Online.

Antibiotics are a type of medication used by doctors to treat bacterial infections in patients. Whilst antibiotics can be very helpful in the right circumstances, they often have no benefit for many types of infection and using them unnecessarily increases the risk of antibiotic resistance so they should not be used routinely.

How do antibiotics work?

How should I take antibiotics?

Antibiotics need to be taken as directed on the information leaflet that comes in the packet or as instructed by your doctor or the pharmacist.

Unless your doctor tells you otherwise, it is absolutely essential to finish taking the whole course of antibiotics that’s been prescribed, even if you’re feeling better because if you stop taking antibiotics part way through a course this helps the bacteria become resistant to the antibiotic.

Antibiotic resistance is when bacteria no longer respond to treatment with antibiotics. This

has become a major healthcare problem worldwide. In order to try and deal with this problem, here in the UK and throughout the rest of the world, healthcare organisations are trying to reduce the use of antibiotics, especially for conditions that aren’t serious.

Also because antibiotics destroy some of the harmless bacteria that live in the body this allows the resistant bacteria to multiply more quickly and replace them.

The overuse of antibiotics in recent years has played a major role in antibiotic resistance. This includes using antibiotics to treat minor infections that would have cleared up by themselves.

The result of antibiotic resistance has led to the development of new strains of bacteria called ‘superbugs’. ‘Superbugs’ are bacteria which are resistant and therefore can’t be treated with any existing antibiotics.

Infections from ‘superbugs’ can be serious as they are difficult to treat. There are now increasing cases of disability and death across the world as a result of ‘superbugs’.

‘Superbugs’ are widespread in some parts of the world including Europe and we’re now starting to see them in the UK.

See the links for further information about Antibiotics Awareness and what we all need to do to try and prevent the progression of antibiotic resistance. 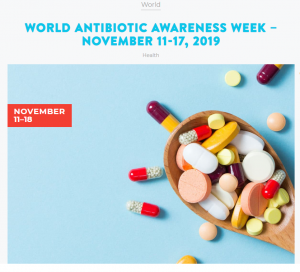